On 31st August, 1957.... The Federation of Malaya (Persekutuan Tanah Melayu) gained her Independence.... 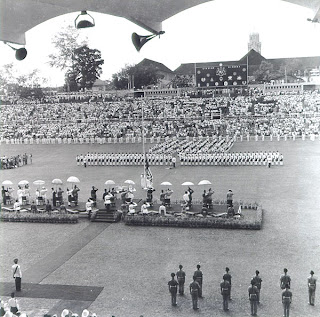 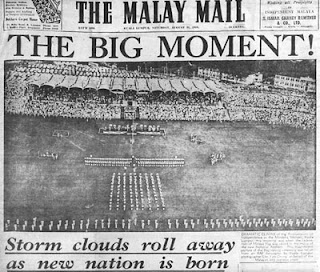 Pictures are by courtesy of Mr Chung Chee Min, who was present at the Merdeka Stadium (Stadium Merdeka) on that proud and historical day 31st August, 1957..... proudly witnessed the Proclamation of Malayan Independence, followed by the shouts of "Merdeka... 7x" by our 1st Prime Minister, Tunku Abdul Rahman Putra Al-Haj ibni Almarhum Sultan Abdul Hamid Halim Shah, and the raising of the Flag of Malaya (the lowering of the Union Jack too) while the national anthem (Negaraku)was sung....; signifying the Independence of The Federation of Malaya (Persekutuan Tanah Melayu)


Brother Chee Min shared his treasure with us:


Since it's August 31, I'd like to share my composite photo of the stadium on that day 54 years ago, as snapped by me. The Malay Regiment is mounting the guard of honour and music is provided by the Police band. The field is ringed by cadets and members of the St John's Ambulance Brigade (in white).
Hari Merdeka signifies the Independence of Malaya and is not to be confused as the formation of Malaysia.  Malaysia was formed in 1963 on 16th September (which is now being known as Malaysia Day) when Singapore, Sabah and Sarawak merged into the Federation of Malaya.  Then in 1965, Singapore became independent and was no longer in Malaysia.
However, surprisingly Malaysia Day was never celebrated in the peninsular (West Malaysia), until 2010 when 16 September was finally declared as an official federal public holiday for the whole nation.
Posted by Alice..... at 8:30 PM

Alice.....
Sharing some of my cooking and recipes here....

EXERCISE YOUR RIGHTS..... UNDI-LAH! VOTE-LAH! REGISTER YOURSELF..... IT'S YOUR RIGHT!

Thank you for visiting...

Feed little hamster by clicking your mouse. Click the wheel center to get him back on it.